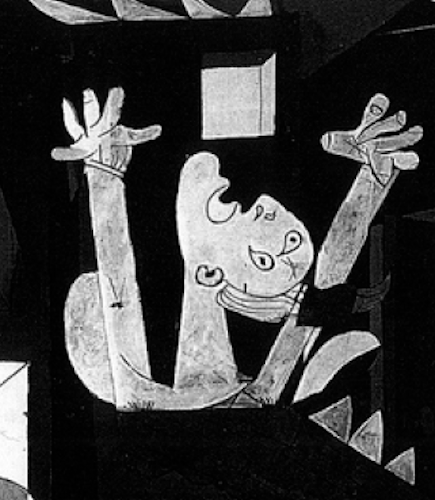 They don’t keep her from falling

Note: The image is a detail of Picasso’s Guernica.

THE ESSENCE OF WAR

And a mother struck by grief

The essence of war

Note: The image is a detail of Picasso’s Guernica.

Thinking is far from easy

Kazuko came from a very traditional Japanese family, but she ended up getting a Fulbright scholarship and moving to New York City. Once she returned home when both of her parents were ill and in the hospital. Being a dutiful daughter in many ways, she spent time with both parents. Because they were on different floors, she would spend time with one parent, then go to a different floor and spend time with the other parent. This, however, was something that the lady who shared a room with her mother did not know. This lady’s daughter was dutiful indeed, spending morning, afternoon, and evening with her. When Kazuko had to return to New York, this lady gave her a gift: a box of seaweed in a bag that had written on it traditional Japanese calligraphy. Kazuko thanked the lady for the gift, then carried it on board a train, where she fell asleep. When she woke up, she deciphered the calligraphy — and was horrified because it said, “Those who betray and do not take care of parents will be punished for not knowing the virtue of filial piety.” While Kazuko had been sleeping, other Japanese people on the train had been able to read the calligraphy and receive the clear message that she was a bad daughter!

When she was a teenager, children’s mystery writer Joan Lowery Nixon fell from a horse and suffered a fractured skull. Her sister, Pat, was attending a Catholic school and asked the nuns to pray for Joan. Shortly before the nuns were to begin praying for her, Joan fell into a deep sleep despite an incessant headache, and she dreamed that her late grandfather stroked her forehead. When she woke up, her headache was gone and she was very quickly well again. Later, Joan met one of the nuns who had prayed for her. The nun pointed out, “You were healed when we prayed for you.” This was true, and the nun speculated, “You received a message from God. You must listen and look within yourself. I believe that God wants you to become a nun.” However, Joan had recently discovered the wonderful world of cute boys, so she replied, “I’m not sure what message God gave me. Maybe he wants me to become the mother of a bishop.”

Early in her skating career, Sasha Cohen collided with another skater on a practice rink. Her leg didn’t feel right, so she went off the ice to examine the wound. Blood was present, and Sasha felt squeamish, but fortunately an older figure skater, Jenni Meno, came by and knew exactly what to do and say to reassure her: “It’s OK, you’re fine, it’s gonna be fine.” Unfortunately a younger figure skater, Naomi Nari Nam, came by, and she didn’t know what to say to reassure her: “OH, MY GOD! WHAT HAPPENED? THERE’S A HUGE HOLE IN YOUR LEG!” Sasha ended up at the hospital and got 21 stitches.

New York Giant linebacker Dan Lloyd battled injuries and illnesses, including a bout with a cancer called lymphocytic lymphoma, which he won. However, many of the other players didn’t want to be near him because his injuries and illnesses reminded them that the same things could happen to them. One day, he was sitting in the back of the team bus—alone, because no one wanted to sit near him. He loudly shouted, “What’s the matter? Have I got cancer or something?” His teammates laughed, and then several players moved to the back of the team bus to keep him company.

The mother of Sarah Hughes, the gold-winning medalist in women’s figure skating at the 2002 Winter Olympic Games, overcame breast cancer. When she told Sarah and her other children about the breast cancer, Sarah was confident that her mother could overcome the disease. After all, Olympic gold medalist Scott Hamilton had overcome testicular cancer with chemotherapy. Sarah’s mother said, “I wanted to call up Scott Hamilton and just kiss him. Someone my daughter knew of and admired so much had been through cancer and beat it.”

Apparent setbacks may not be true setbacks. In the United States, Mary Anthony once danced some difficult steps well at a rehearsal for the musical Touch and Go, which was choreographed by Helen Tamiris. Ms. Anthony kept dancing the difficult steps and suddenly she heard a crack like a board being broken, but it was her foot that was broken—in two places. She was not able to dance in Touch and Go, but the musical’s director, George Abbott, witnessed her injury and was so impressed by her dedication that he asked her to stage the musical in London.

Stan and Jan Berenstain are the creators of the Berenstain Bears. As you would expect, they both liked to draw from an early age. When Jan was a little girl in elementary school, she broke her collarbone play-wrestling with another girl. The doctor put her arm in a sling and told not to use that arm for a while. Because Jan liked drawing, when it came time for art class she tried to take her arm out of the sling so she could draw, but her teacher made put her arm back in the sling. Jan read a book while everyone else drew.

Conductor Jeffrey Tate suffers from spina bifida and kypho-scoliosis, which have caused his curved spine. His mother, of course, had hoped for an entirely healthy baby, and after he was born, she wondered why God had allowed this to happen. Unfortunately, a local vicar told her, “You know, if your faith were strong enough, Jeffrey would be made whole.” Of course, she did not return to that church until years afterward.

Elsie De Wolfe was an excellent interior decorator. When she was dying, she went to the hospital, where she was appalled by the decor. How appalled was she? She redecorated — and billed the hospital for her services.

Heinrich Conried’s love of rich food did affect his life negatively in one way. He kept a box of bicarbonate of soda near him, and occasionally after dinner, he would reach for the box and say, “This is my lifesaver!”