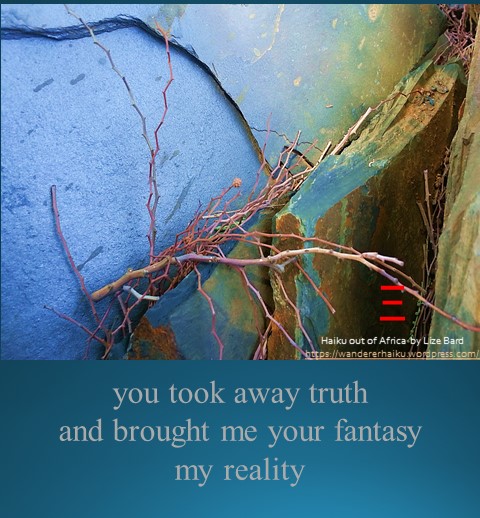 Haiku out of Africa

you took away truth ~ and brought me your fantasy ~ my reality

@ Haiku out of Africa

Then I will greet Him”

The point of the story is about our hope for a better future, maybe for us but most definitely for our children. You see, the old man is eventually each one of us. We plant and harvest all through our life. It’s what we do. We sow seeds of good works and we harvest dividends to support our households and our communities. And, quicker than we thought it would happen, we grow older, too; but we still sow seeds. We still plant for the future. It’s what we do, even if the fruit is something only our children and grandchildren will enjoy.

Building the Future with Hope in our Hands

What will result in justice: for two disputants to go into a court of law with lawyers representing each side, or for two disputants to go before a rabbi? To answer this question, Rabbi Avraham Yehoshua told this story: A wolf once killed a deer, but before it could eat the deer, a lion came along and took the deer from the wolf. Seeking justice, the wolf asked a fox to judge the dispute. The wolf claimed that he deserved the deer because he had killed it, but the lion claimed that he deserved the deer because he was the king of the jungle. The fox said that the only reasonable solution was to divide the deer, giving the wolf and the lion an equal share. However, when the fox divided the deer, it was not in equal halves, so the fox took a big bite of the larger half. Now the other half was bigger than the first half, so the fox took a big bite out of it, making the first half bigger than the second half. This continued until the fox had eaten the deer, leaving only bones for the wolf and the lion. A court of law is often like the fox: By the time the lawsuit is settled and the lawyers have received their payment, nothing is left for the disputants.

Pope John XXIII used to tell this joke about lawyers: St. Peter once noticed that there were some unsavory characters in Heaven, and after investigating, he discovered that a breach had been made in the wall separating Heaven from Hell. Therefore, he visited Satan, and the two agreed that they would take turns maintaining the wall. St. Peter would maintain the wall the first year, Satan the next, and so on. The two even signed a legal contract to that effect. The first year, things went fine; St. Peter maintained the wall, and no breaches were made in it. However, the second year, St. Peter again noticed some unsavory characters in Heaven, and he discovered that another breach had been made in the wall. Immediately, St. Peter visited Satan, denounced him for not living up to his part of the contract, and said that he was going to sue. Satan laughed, saying, “I’m not worried. Do you think you’ll find even one clever lawyer in Heaven?”

Rabbi Israel Meir Kagan was reputed to be a saint. Once he was called to be a character witness at a trial for one of his students, who had been falsely accused. The lawyer for the defense stood up and began to tell the court a story that was told about Rabbi Kagan. He said that once a thief had been in the rabbi’s house when the rabbi came home early. The thief grabbed some of the rabbi’s property and ran away, but the rabbi said, “I hereby renounce all my property,” so that the thief would not be guilty of breaking one of God’s commandments. Hearing this, the judge skeptically asked, “And do you believe this story?” The lawyer replied, “I don’t know that I believe this story, but I do know that such stories are not told about you and me.”

At the Salem Witch Trials in 1692, much odd evidence was seriously and legally considered. For example, if an accused person was unable to correctly say the Lord’s Prayer, this was considered evidence that the accused person was a witch. Also, spectral evidence was seriously considered, as when men testified that the specter of an accused woman had visited them when they were home in bed. In addition, the accused persons were stripped and searched (by members of the same sex) for the mark of the devil — a small red circle, usually found near the genitals.

A Scottish judge named Lord Eskgrove once castigated in court the murderer of a soldier: “And not only did you murder him, whereby he was bereaved of his life, but you did thrust, or push, or pierce, or project, or propel the lethal weapon through the belly-band of his regimental breeches, which were His Majesty’s.”

Toler, who later became Chief Lord Justice in England, was once asked to contribute a shilling to the burial of a lawyer. Reaching into his pocket for some money, he gave it to the solicitor, saying, “Only a shilling to bury a lawyer? Here is a guinea; go and bury one and twenty of them.”

Art Linkletter occasionally ad-libbed during his career as a broadcaster. During an on-site radio program, the sound of sirens was heard, so Mr. Linkletter informed the audience, “There goes an ambulance — followed by a carload of lawyers.” The local bar association was not amused.

Barnes and Noble (Books for Sale, and Free Books) 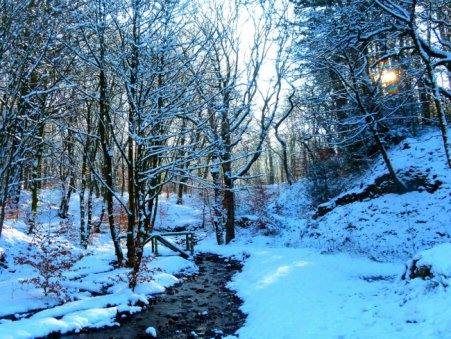 Originally posted on Sue Vincent’s Daily Echo: Magic * Pale snow shrouds the world Moments of perfect silence Counted by heartbeats * In childlike wonder Magical reality Dreamed into being * Fragile as snowflakes The veils between worlds waver Enchanting the land * The photo for this week’s prompt was taken one snowy day…