Why would they call it

if it did not also

a lot of pirates make

is burying their treasure on a place called Treasure Island.

It’s sort of a giveaway. 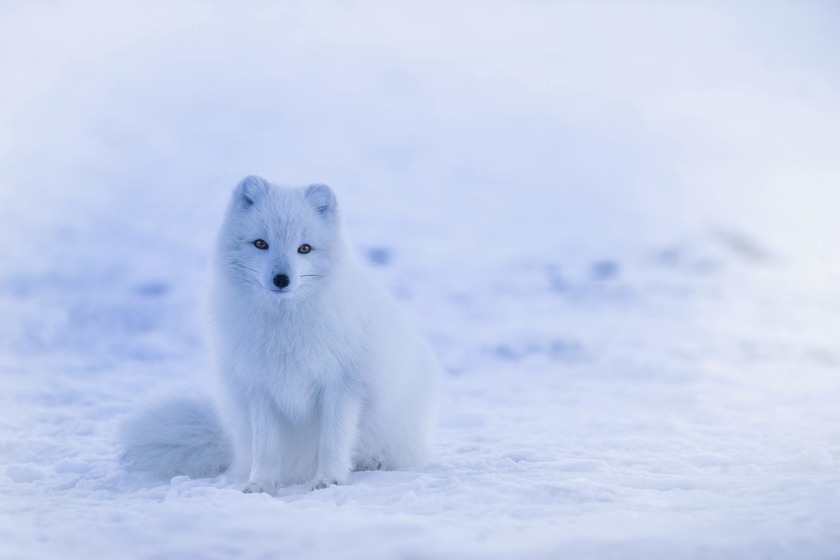 to me, but it’s a fine home

to this arctic fox

Who the hell are you?

How can you possibly think

You’ll get it today?

Jello Biafra, lead singer of the Dead Kennedys, collects really strange music. One kind of recordings that he likes is Do-It-Yourself Recordings. On one record that he has, you can hear the wife of one of the musicians say on the record, “Oh, are you recording? Should I turn the dryer off?” He has a DIY album that is rare because most copies were shrink-wrapped on a meat-packing machine—which melted most of the vinyl copies. By the way, Jello enjoys telling a story about German singer Heino, who wore sunglasses and a remarkable blonde hairdo on most of his album covers. A German band called Die Totenhosen—a punk band with humor—had a friend come onstage dressed as Heino with sunglasses and a blonde wig. He claimed to be the real Heino, and he and the band deliberately played Heino’s songs very, very badly. This did not please the real Heino, and he sued. Apparently, he did not think that he ought to be the subject of parody. Die Totenhosen responded by having their fans attend the trial dressed like Heino.

C.J. Ramone (Christopher Joseph Ward) took over on bass after Dee Dee Ramone (Douglas Colvin) left the Ramones. When he first began playing music, he played the drums, but he says that he ran into a problem: “When I was young, I played drums, but they must have been too noisy because I came home one day and they were gone.” Another Ramones drummer was Marky Ramone (Marc Bell), who says, “I’ve always drummed in their style—steady and hard-hitting—but it was difficult working myself up to the speed. There are three speeds in the Ramones: fast, pretty fast, and very fast.” The Ramones’ first album—which was self-titled—is regarded as one of the greatest and most influential rock albums ever, but some critics—of course—did not like it. Stephen Ford referred to their speed when he wrote in the Detroit News, “They don’t waste their time—they waste yours.”

Mickey McGowan, creator of the Unknown Museum, enjoys collecting odd records. Among them is an album titled Music to be Murdered By. As you may expect, the portly suspense movie director Alfred Hitchcock introduces each musical selection and tells jokes in his distinctive voice: “Why shouldn’t I make a record? After all, my measurements are 33-45-78.” About a record titled Companion to TV, Mickey says, “When I played [it], I discovered it was absolutely silent—there’s no sound on the record! Whoever made this was pro-television and wanted to make sure that if you got the urge to play a record while watching TV, you couldn’t possibly interrupt anything.”

When young-adult author Richard Peck was in junior high school, he was asked to play the sousaphone in the marching band because he was the only student who was tall enough to play it. Richard readily agreed to play the sousaphone because it was so big that he figured that he would not be able to take it home and therefore he would not have to practice playing it at home on the weekends. Unfortunately for Richard, his band director dropped off the sousaphone at Richard’s house every Friday. After Richard had practiced playing it on the weekend, his father took the sousaphone back to Richard’s school on Monday morning.

In the 17th century, Irishman Michael Kelly composed theater music and sold wine. His wine shop had this sign: “Wine merchant and composer of music.” Richard Brinsley Sheridan preferred Mr. Kelly’s taste in wine to his taste in music and advised him to change his sign to this: “Merchant of music and composer of wines.” By the way, Dr. Samuel Johnson did not especially like music. He once listened to a virtuoso violinist play a pyrotechnical piece. Hearing a companion remark that the violin piece must have been very difficult to perform, Dr. Johnson remarked, “Difficult! I wish to God that it had been impossible!”

Steven Tyler of Aerosmith is a hard-working man. For a while, he and the band spent so much time on the road that even when he was home he would wake up and automatically telephone for room service. By the way, he wrote all the lyrics to the songs on the Aerosmith ROCKS album, but accidentally left them in a manila envelope in a taxi. Mr. Tyler says, “I lost the whole thing—all the words to the songs. I had to go back to the Ramada Inn on 8th Avenue and sit with the headphones and bring it all back. I got about 50 percent of it. Can you imagine what was in that cab that went into the wastebasket?”

Frequently, the question “Stones or Beatles” comes up in discussions about music. Someone asked that question to record producer Guy Picciotto. He replied, “The Smiths.” Beth Ditto, lead singer of Gossip and a supporter of riot grrrl music, has two good answers to the question “Ramones or Sex Pistols?” One answer is this: “The Slits.” Another answer is to ask this question in reply: “Heavens to Betsy or Bratmobile?”

YouTube allows viewers to press a button to indicate whether they like or dislike a video. For example, a video of the excellent A Touch of Class song “I’m in Heaven (When You Kiss Me)” was given over 1,500 likes and 24 dislikes. ATC fan Gemgurllove has a very plausible explanation for the 24 dislikes. She commented, “24 people were too busy pressing the replay button they pressed the wrong button!”

In 2009, the band known as the xx released their first album, a self-titled album that quickly became critically acclaimed. The xx’s early days were rough. They played gigs during which the audience talked all through their songs, which were mostly quiet. Madley Croft remembers, “If there were three people in the front row who were into it, that was a success.”

Some country and western singers are very practical. For example, when one of Trace Adkin’s early wives (not Rhonda) shot him, one of the things he immediately thought about was that he had new carpet and he did not want to bleed on it. So he walked over to a tile floor, collapsed, and bled on the tile.

The pianist Vladimir de Pachmann declined to attend recitals by other pianists, explaining, “If he plays badly, I am bored. If he plays well, I am miserable.”