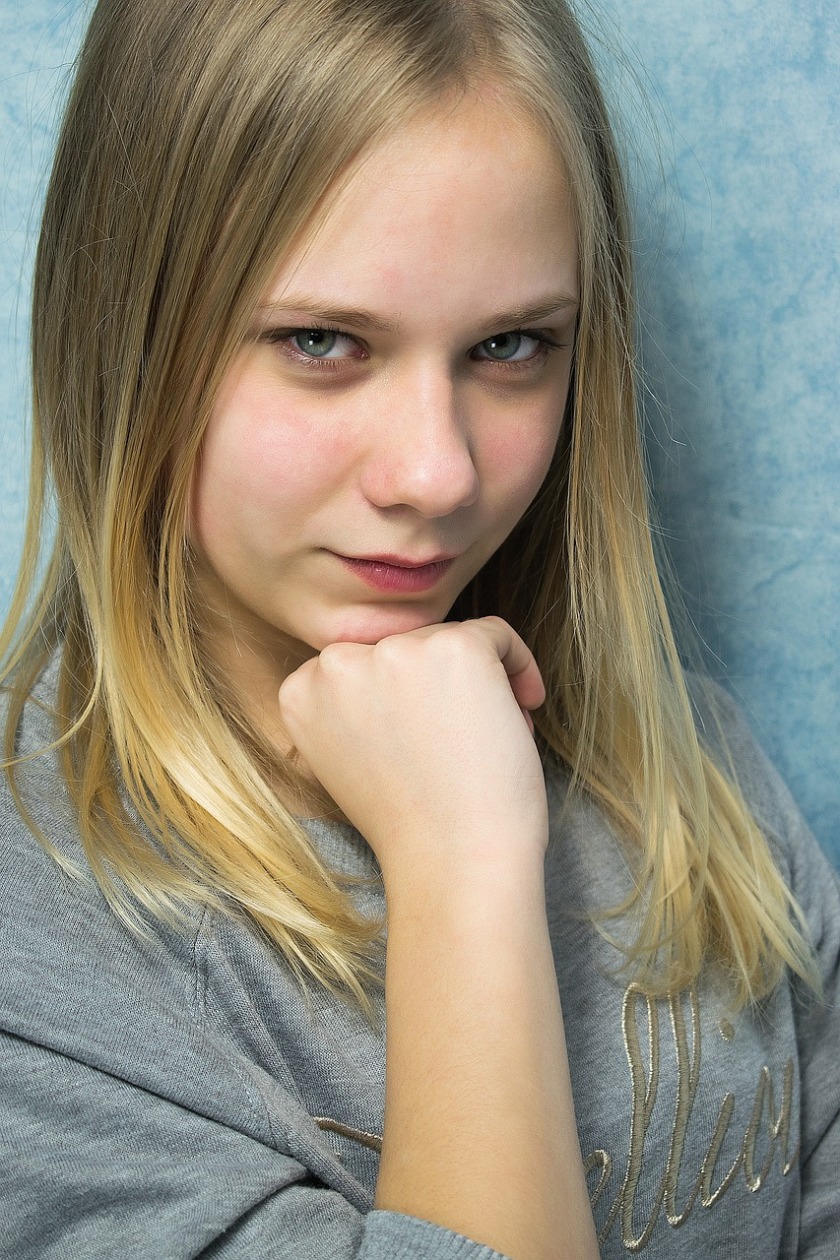 I will break your heart

You know it, and I know it

Just look at my smirk

A REASON TO BE RICH

nice to be wealthy 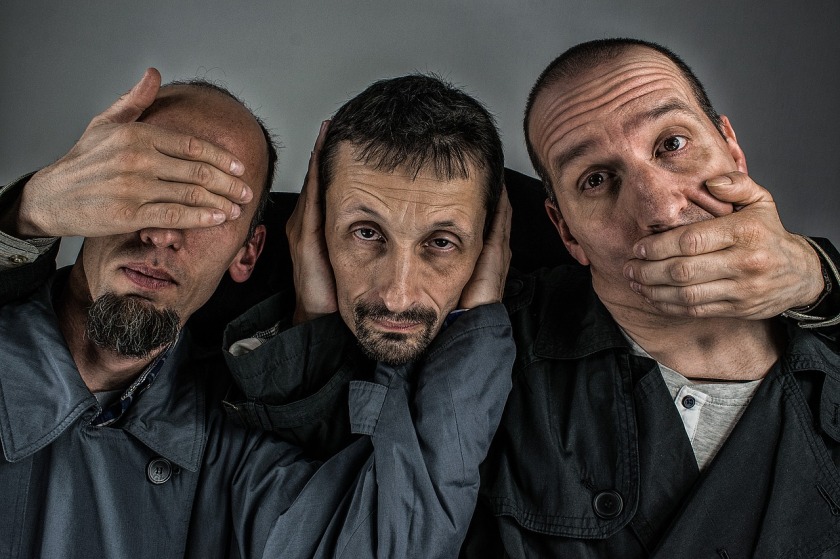 Is this good advice?

See, hear, and speak no evil

Speak no evil is 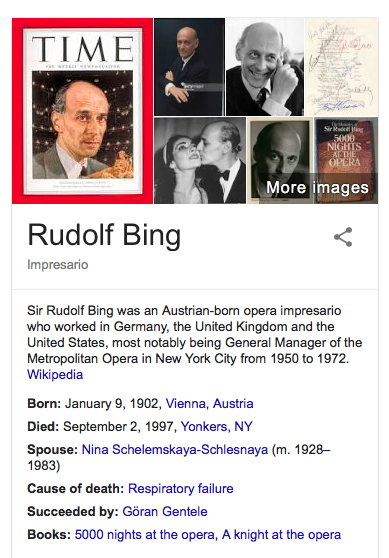 Sir Rudolf Bing listened to thousands of auditions, and of course, the vast majority of these auditions did not result in job offers. However, Sir Rudolf always performed a good deed at these auditions, even when he knew after the first note had been sung that the singer was not right for the Met. First, he always allowed the singer to sing a piece of their choice for the first number. Second, he always allowed the singer to sing a second number. According to Sir Bing, “It’s just too humiliating to terminate an audition after the first number.”

Fayard Nicholas of the dance team the Nicholas Brothers loved vaudeville and hung out in the theaters, watching all the acts and learning from them. When he was 11 years old, he decided to become an entertainer, and so he created an act for himself and his brother and sister. They stayed up late rehearsing the act, and when their parents reminded them that it was a school night, Bayard told them, “We have something to show you.” Their parents watched the act, then they looked at each other and said, “Hey, we have something here.” Their father had them audition for the manager of the Philadelphia’s Standard Theater, who quickly told him, “They’re booked for next week.” The Nicholas Brothers became a famous dance team in movies.

Throughout her career, soprano Helen Traubel was compared to another great soprano: Kirsten Flagstad. Early in her career, Ms. Traubel auditioned for a radio program, although she had broken out in fiery spots because of an allergy to a kitten she had cuddled. In the middle of the audition, she noticed the radio engineers in the control room laughing, and she assumed that they were laughing at her appearance, so she threatened to leave. However, they convinced her to stay, explaining that they were laughing because the radio bigwigs, who were listening in an upstairs room, had called to tell them, “Stop your kidding. Turn off that Flagstad record and let that kid you’re auditioning start singing.”

Pop star and actress Brandy attended the Hollywood High Performing Arts Center, where she studied acting and singing. She thought that her drama teacher would recommend her for auditions, but that didn’t happen. One day, Brandy asked her drama teacher, “Why aren’t you sending me out on calls?” The teacher replied, “Because you’re not drop-dead gorgeous.” The criticism didn’t stop Brandy, who starred as Cinderella on television. By the way, one person who had faith in Brandy’s talents from the beginning was Brandy’s mother, who, after giving birth to Brandy, told her physician, “You just birthed a star.”

Soprano Beverly Sills felt that she was too tall to sing the title role in The Ballad of Baby Doe, but eventually she agreed to audition for the role. She wore high spiked heels which made her even taller, and before she began to sing, she said, “This is how big I am before I sing, and I’m going to be just as big when I finish. So if I’m too big for your Baby Doe, you can save my energy and your time by saying so right now.” The composer of the opera, Douglas Moore, told her she looked “just fine,” and after she had sung, he was awed and told her, “Oh, Miss Sills, you are Baby Doe.”

Early in her operatic career, Grace Moore sang “Depuis le jour” from Louise at an audition in front of conductor Albert Wolff. After she had finished singing, Mr. Wolff told her, “My dear, you have a beautiful voice, but you don’t know what you are singing about. Go out and live and then come back and sing it for me, and I will tell you what career you shall have.” Years later, Ms. Moore again sang “Depuis le jour” for Mr. Wolff. This time, he told her, “I don’t know what you have done since I spoke to you last, but you have exceeded expectations.”

Mary Anthony danced so impressively at an audition that Hanya Holm gave her a three-year tuition waiver. Actually, Ms. Anthony believed that she was successful at the audition because she owned only one record. She was required to dance two solos, and after she had danced to the music of the one record she owned she danced her second solo without music. This “decision” of hers so impressed Ms. Holm that she gave her the tuition waiver.

Auditions do not always go well. At the very beginning of her career, modern dance pioneer Isadora Duncan auditioned for a travelling theatrical company by dancing passionately to Felix Mendelssohn’s Songs Without Words. The manager of the company remained silent for a few moments after the audition, then said to Isadora’s mother, “This sort of thing is no good for a theater. It’s more for a church. I advise you to take your little girl home.”

David Hasselhoff starred in Baywatch, which was a huge international hit. Earlier, he had struggled as an actor, and so he was kind to struggling actors. Often, after a first scene in an audition he knew that he could not use a particular actor in the TV series, but he would allow the actor to do a second scene anyway, he says, “because I knew they’d practiced, because I knew how much it hurt me when I got rejected when I first started.”

When Merrill Ashley auditioned for the School of American Ballet, the whole thing took about 10 minutes, with dance teacher Antonina Tumkovsky twisting Merrill’s legs around to see how flexible she was presently and how flexible she might become. She did pass the audition, was accepted into the SAB, and later found out that the report on her audition said, “Good feet, rather nice”—which was high praise for an audition at this particular school.