And loss of freedom

Ben Jonson’s The Alchemist: A Retelling in Prose 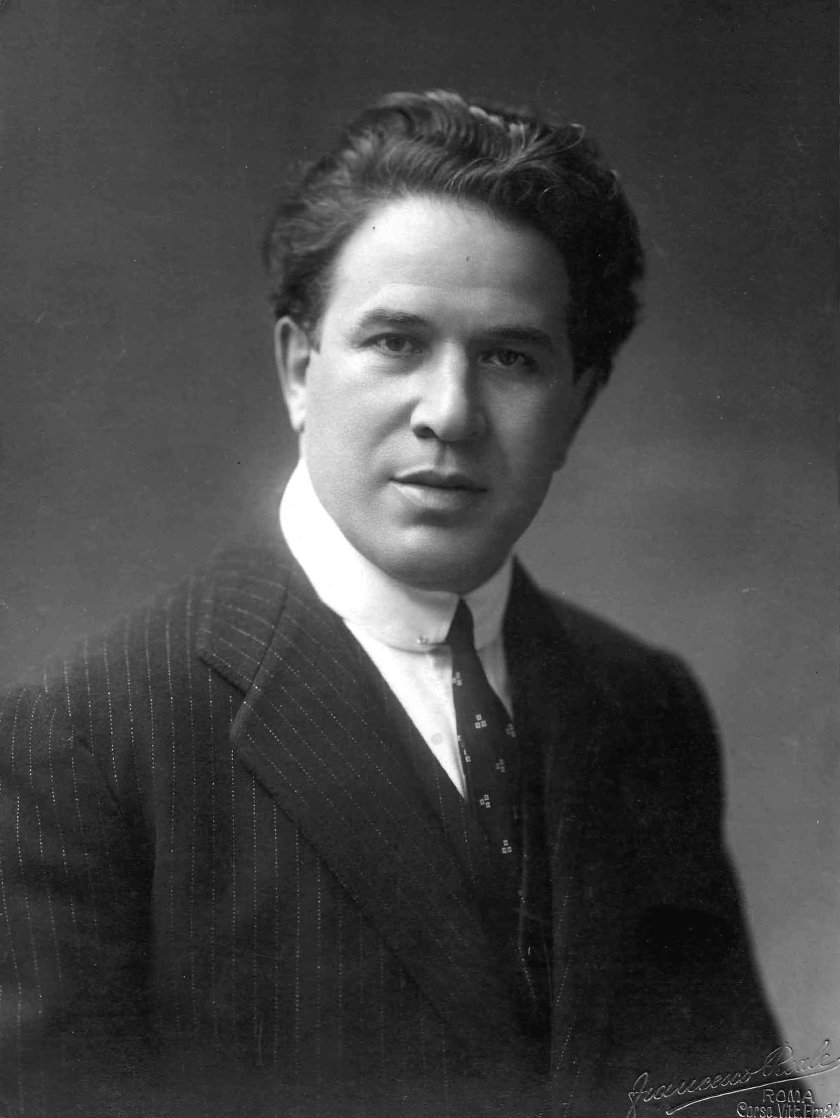 In 1931, several Italian opera singers sailed to the Colon in Buenos Aires. Among the singers were baritone Titta Ruffo and tenor Galliano Masini. Perhaps expecting a compliment, Mr. Masini asked Mr. Ruffo, “After Caruso, who is the world’s greatest tenor?” However, he did not receive a compliment. Instead, Mr. Ruffo replied, “One fart from Caruso would drown out all the tenors active today.”

Often, people know their singing idols only through records and not through live performances, so they have little idea what their idols look like. Baritones Adolfo Mariani and Titta Ruffo once were in a restaurant talking about and comparing the great baritones of the past and the present when their waiter told them, “You signori know NOTHING about baritones. You haven’t even mentioned the greatest of them all, Titta Ruffo, who comes from my hometown, Pisa.” Wanting to have some fun, Mr. Ruffo told the waiter, “Oh, come off it. Compared with Riccardo Stracciari, Ruffo’s voice was a fart.” The waiter was offended — until Mr. Ruffo identified himself, and then the waiter was overcome with joy to meet the baritone he so much admired.

Comedian Jonathan Winters sometimes has to deal with negative people — which provides an outlet for his fertile brain. Someone once asked him, “Aren’t you somewhat of a has-been?” He replied, “No question about it, but I’m an international has-been whereas you’re just a local has-been.” Mr. Winters once created a bitter epitaph for his gravestone: “Step on me. Everyone else did.” Of course, not everything in his life is bitter. Robin Williams and many other comedians are fans of his. The Ohio-born Mr. Winters once told Mr. Williams to stop referring to him as a mentor: “That’s a bad word in Ohio. Say ‘idol.’”

Both Mike Nichols and Elaine May could be hostile, and both were masters of the put-down. Ms. May, a beautiful woman, was once followed by two men who blew kisses at her. Never one to take BS, she turned around to face the men and asked them, “What’s the matter? Tired of each other?” When one man replied, “F — k you,” she replied, “With what?” While Mr. Nichols was directing The Odd Couple, he gave actor Walter Matthau a direction that the actor thought was emasculating, so he asked Mr. Nichols, “Mike, can I have my c — k back now?” Mr. Nichols yelled, “Props!”

In the early 1980s, insult comic Judy Tenuta and comedian Tommy Hack worked together. They were going to do a gig in the badlands of South Dakota. Mr. Hack was driving — it was his Ford Pinto — and about 100 miles from their destination he asked Ms. Tenuta, “Hey, Judy, you saw my act last night, so what do you think of it? Be honest, what do you really think?” She replied, “Ask me when we get within walking distance of the town.”

Keith Olbermann of MSNBC Countdown With Keith Olbermann fame has a sharp mind, sharp wit, and sharp typing fingers. As you might expect, he gets a lot of hate e-mail, and on occasion he has responded — forcefully. To a hate e-mailer who wrote that his “hero” must be al-Qaida leader Abu Musab al-Zarqawi, Mr. Olbermann responded, “Hey, save the oxygen for somebody whose brain can use it. Kill yourself.”

Geoff Hilton, a young family friend of science fiction writer Anne McCaffrey, was noted for insulting Barbara, his sister. At a dinner during which Geoff had steadily been insulting Barbara, Anne said, “But, Geoff, we all know that the English insult only those they really love.” Geoff thought this over for a moment, then turned to his sister and said, “Barbara, dear, have I told you how marvelous you look?”

Sir Thomas Beecham disliked the music of Vaughan Williams. At one rehearsal, he conducted a William symphony, but he seemed to be paying very little attention to it. In fact, after the symphony was over, Sir Thomas continued to move his baton until a member of the orchestra told him, “It’s finished, Sir Thomas.” Sir Thomas looked at his score and said, “So it is — thank God!”

Jack Riley played the character of the insulting, misanthropic Mr. Elliott Carlin on The Bob Newhart Show. Frequently, fans of the show ask him if he is anything like the character he portrayed. Because he is a professional comedian, Mr. Riley’s standard response to this question is in the character of Mr. Carlin: “Bite me, you wiener.”

In the 1987-88 season, the Los Angeles Kings had a very poor season: 30-42-8. One hockey fan was so angry at the losing season that he decided to insult the players by tossing a live chicken onto the ice during a game — the chicken was wearing a uniform the same color as the Kings’ uniforms.

Gioacchino Rossini was not fond of the sound of the high notes sung by the tenors of his day, and when Enrico Tamberlik wanted to visit him in Paris, Mr. Rossini requested that he leave his C-sharp in the vestibule until his visit was over.

George Bernard Shaw once ate at a restaurant where a band played popular music. The proprietor of the restaurant brought him a card on which he could write what he wanted the band to play. Mr. Shaw wrote, “Dominoes.”

In the 20th century, sopranos Maria Callas and Renata Tebaldi feuded. Ms. Callas, however, denied that they were rivals: “How could we be rivals? I am champagne, and she is Coca-Cola.”

Now light the candles; one; two; there’s a moth;
What silly beggars they are to blunder in
And scorch their wings with glory, liquid flame—
No, no, not that,—it’s bad to think of war,
When thoughts you’ve gagged all day come back to scare you;
And it’s been proved that soldiers don’t go mad
Unless they lose control of ugly thoughts
That drive them out to jabber among the trees.
Now light your pipe; look, what a steady hand.
Draw a deep breath; stop thinking; count fifteen,
And you’re as right as rain …
Why won’t it rain? …
I wish there’d be a thunder-storm to-night,
With bucketsful of water to sluice the dark,
And make the roses hang their dripping heads.
Books; what a jolly company they are,
Standing so quiet and patient on their shelves,
Dressed in dim brown, and black, and white, and green,
And every kind of colour. Which will you read?
Come on; O do read something; they’re so wise.
I tell you all the wisdom of the world
Is waiting for you on those shelves; and yet
You sit and gnaw your nails, and let your pipe out,
And listen to the silence: on the ceiling
There’s one big, dizzy moth that bumps and flutters;
And in the breathless air outside the house
The garden waits for something that delays.
There must be crowds of ghosts among the trees,—
Not people killed in battle,—they’re in France,—
But horrible shapes in shrouds–old men who died
Slow, natural deaths,—old men with ugly souls,
Who wore their bodies out with nasty sins.
*          *          *
You’re quiet and peaceful, summering safe at home;
You’d never think there was a bloody war on! …
O yes, you would … why, you can hear the guns.
Hark! Thud, thud, thud,—quite soft … they never cease—
Those whispering guns—O Christ, I want to go out
And screech at them to stop—I’m going crazy;
I’m going stark, staring mad because of the guns.
*** 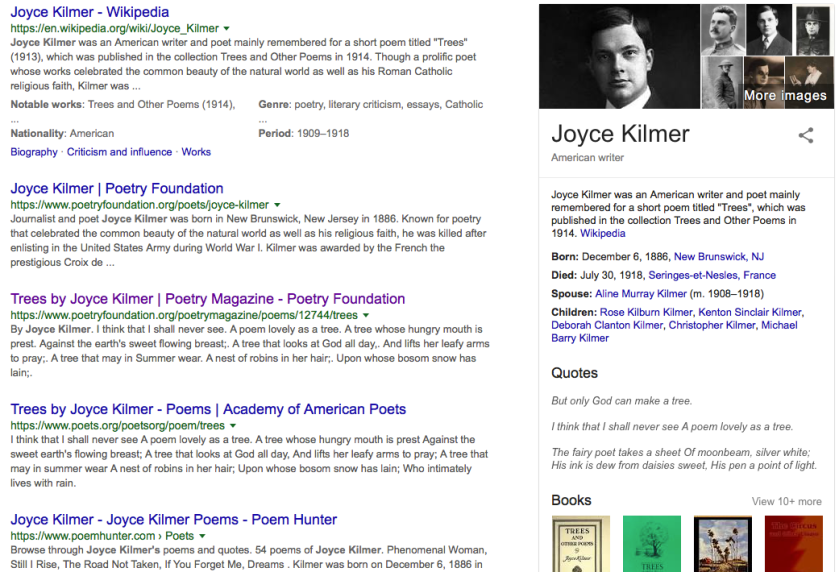 I think that I shall never see
A poem lovely as a tree.
A tree whose hungry mouth is prest
Against the earth’s sweet flowing breast;
A tree that looks at God all day,
And lifts her leafy arms to pray;
A tree that may in Summer wear
A nest of robins in her hair;
Upon whose bosom snow has lain;
Who intimately lives with rain.
Poems are made by fools like me,
But only God can make a tree.
***