loosened by the gentle breeze

Some people are difficult

She digs her fingers

The purpose of life

Is to walk with beauty all

The days of your life 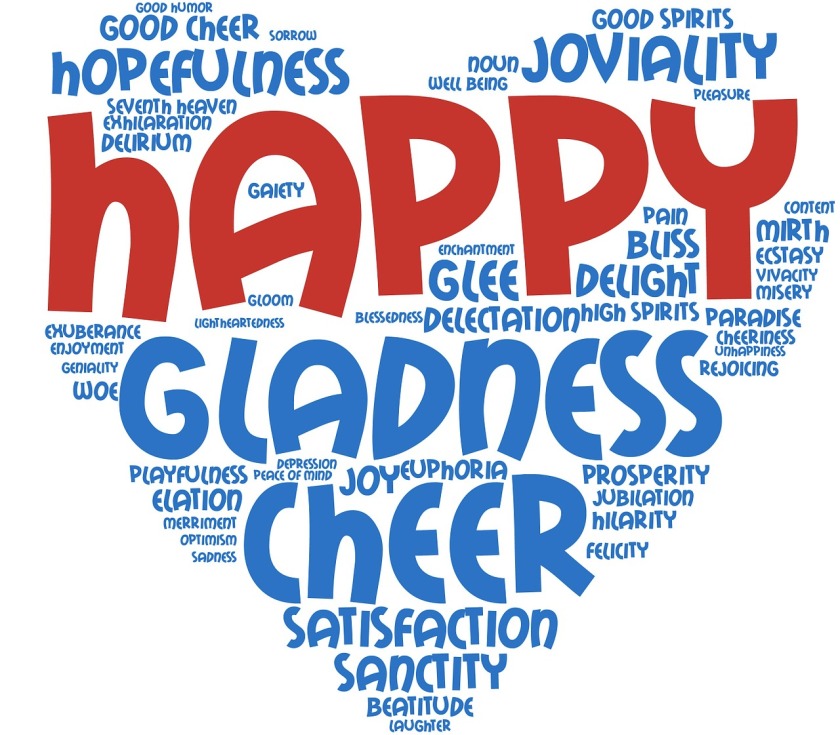 SAY NO TO FORCED OPTIMISM

Forced to be happy?

What’s so wrong with some sadness, 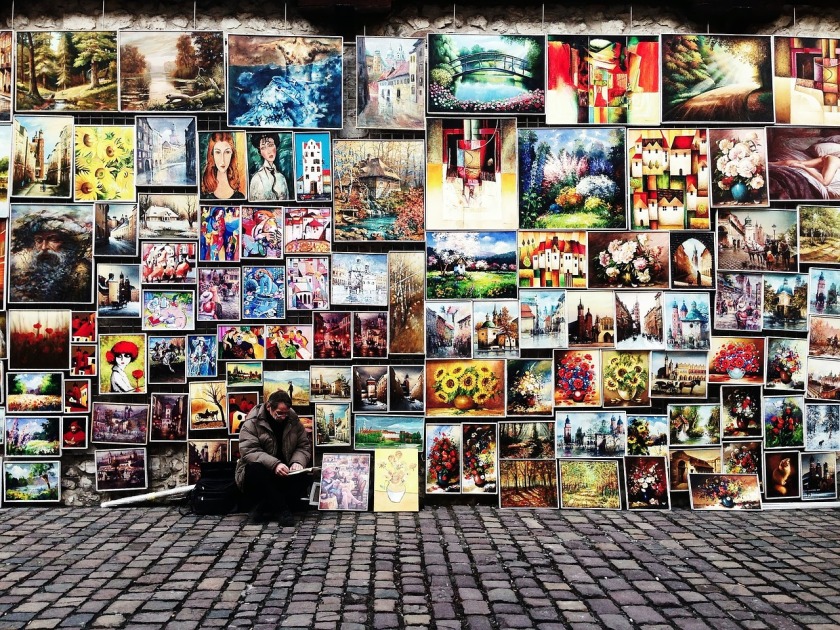 A wall of paintings

Started with one blank canvas

His life is well lived

In a room in the castle, King Claudius talked with Rosencrantz and Guildenstern.

“I do not like the way that Hamlet is behaving,” King Claudius said. “It is not safe for us to allow his madness free range. Therefore prepare yourselves to perform a commission I will give to you. Speedily I will give you a commission to go to England, and Hamlet shall go to England with you. The terms of our estate may not endure a hazard so dangerous as does hourly grow out of his lunacies. Hamlet’s madness is a threat to me the King.”

“We will make the necessary preparations,” Guildenstern said. “It is a very holy and religious concern to want to keep safe the numerous subjects who depend upon your majesty. If something were to happen to you the King, it would have a bad effect upon your country and your subjects.”

“An individual with one life is bound by natural law to use all its strength and intelligence to keep itself from harm,” Rosencrantz said. “But much more bound is a spirit upon whose well-being the lives of many people depend and rest. A King does not die alone, but like a whirlpool, his death pulls with it what is near. It is like a massive wheel fixed on the summit of the highest mountain. To the wheel’s huge spokes are fastened ten thousand lesser things. When the wheel falls down the mountain, each of the ten thousand lesser and petty things is harmed in the boisterous catastrophe. The general public groans when a King sighs. Never does a King sigh alone.”

“Prepare yourselves to travel quickly,” King Claudius said. “We will put fetters upon this fear, which now goes too free-footed. We will not allow Hamlet to roam freely in Denmark.”

“We will hurry,” Rosencrantz and Guildenstern said.

They exited as Polonius entered the room.

“My lord,” Polonius said, “Hamlet is going to his mother’s private chamber. Behind the arras I’ll hide myself so I can hear their conversation. I am sure that she will berate him soundly.

“As you said, and wisely was it said, it is a good idea that someone other than a mother, since nature makes them partial to their sons, should listen to their conversation from a hidden spot.”

Actually, hiding and listening to the conversation of Queen Gertrude and Hamlet had been Polonius’ idea. He was flattering King Claudius by saying that the idea was the King’s and that it was a wise plan.

Polonius said, “Fare you well, my liege. I’ll call upon you before you go to bed and tell you what I learn.”

King Claudius said to himself, “My offence is so rank that it stinks to Heaven. It has the primal eldest curse upon it: a brother’s murder — the murder of Abel by Cain. I cannot pray, although my desire to pray is as strong as my will and determination.

“My stronger guilt defeats my strong intent. And, like a man who has two tasks to do, I stand and pause as I consider which I shall first begin, and as I pause I neglect both tasks. I can pray and ask forgiveness of my sins and do what I can to make things right, or I can continue to pursue the path I am on and enjoy the fruits of my sin.

“So what if this cursed hand of mine is thicker than itself because it is coated with my brother’s blood? Don’t the sweet Heavens have enough rain to wash it as white as snow?”

He continued, “What is the purpose of mercy except to confront the face of evil? Doesn’t mercy forgive committed sins? And what’s in prayer but this two-fold force: to pray for help to keep us from committing sins, and to pray for forgiveness of those sins we have committed.”

King Claudius was thinking of Mathew 6:13: “And lead us not into temptation, but deliver us from evil: For thine is the Kingdom, and the power, and the glory, for ever. Amen.”

He continued, “I can look up; I have hope. I have committed the sin, and so I know what kind of prayer I must make. But what form of prayer can serve my turn? ‘Forgive me my foul murder’? I cannot pray that because I still have the things for which I committed the murder: my crown, everything I was ambitious for, and my Queen. May one be pardoned and still keep the things that one acquired by committing the sin?

“In the corrupted currents of this world, a guilty hand that is coated with ill-gotten gold from committing a sin may shove aside justice. Often we see that parts of the spoils of a crime are used to bribe officials who ought to uphold the law, but it is not that way in Heaven. There, no one can avoid proper punishment. Here, no one can be forced to give evidence against himself. In Heaven, all evidence is revealed and we who are guilty are compelled to confess our sins and give the evidence that convicts us — we confess the bared teeth and frowning forehead of our faults.

“My state is wretched! My bosom is black as death! My soul has been caught, and as it struggles to be free, it is caught more firmly!

He hesitated and then said, “Let me make an effort with all my might! Bow, stubborn knees! Heart, which is held in place with strings of steel, be as soft as the sinews of a newborn babe!

Hamlet entered the room and saw King Claudius on his knees.

Hamlet said to himself, “Now I can easily kill the King, now while he is praying, and so I will do it.”

He drew his sword and said to himself, “I will kill him, he will go to Heaven, and so I will have my revenge.

“Let me think about this. A villain murders my father, and in return for that murder, I, my father’s sole son, send this same villain to Heaven.

“The villain should pay me to do that! Being sent to Heaven is a reward; sending someone to Heaven is not revenge.

“He murdered my father when my father was unprepared for death and for being judged. My father was full of bread; he was not fasting in penitence for his sins. My father died when all his sins were in full flower and as flush as May.

“Who knows this villain’s spiritual account except Heaven? But according to our society and our way of thinking, he is heavy with sin.

“Would I be revenged if I were to kill him while he is purging his sin? He would be in a state of grace, and he would be prepared for death and for being judged. My father would suffer, while this villain enjoys Paradise.

“No. That would not be revenge. Sword, I will put you away.”

He sheathed his sword, and then he said quietly, “Sword, a more horrid opportunity shall arise and I will use you then. I will use you when this villain is drunk and asleep, when he is furious, when he is enjoying incestuous pleasure in his bed, when he is gambling, when he is swearing, or when he is doing some act that has no taste of salvation in it. That is when I will trip him so that his heels will kick out at Heaven as he falls headfirst into Hell. When he dies, I want his soul to be as damned and black as Hell, to where it will go. I want his soul to be eternally damned.

“My mother is waiting for me.

“King Claudius, this physic, this medicine, merely prolongs your wretched life for a short while longer.”

IT never came into my mind
Until I was ready to die
That Jenny had loved me to death, with malice of heart.
For I was seventy, she was thirty-five,
And I wore myself to a shadow trying to husband
Jenny, rosy Jenny full of the ardor of life.
For all my wisdom and grace of mind
Gave her no delight at all, in very truth,
But ever and anon she spoke of the giant strength
Of Willard Shafer, and of his wonderful feat
Of lifting a traction engine out of the ditch
One time at Georgie Kirby’s.
So Jenny inherited my fortune and married Willard—
That mount of brawn! That clownish soul!

who understood the way of the Tao,

did not educate people, but made them forget.

Smart people are difficult to guide,

because they think they are too clever.

To use cleverness to rule a country,

is to lead the country to ruin.

To avoid cleverness in ruling a country,

is to lead the country to prosperity.

Knowing the two alternatives is a pattern.

Remaining aware of the pattern is a virtue.

This dark and mysterious virtue is profound.

It is opposite our natural inclination,

but leads to harmony with the heavens.

A translation for the public domain by j.h.mcdonald, 1996

Long ago, the mice had a general council to consider what measures they could take to outwit their common enemy, the Cat. Some said this, and some said that; but at last a young mouse got up and said he had a proposal to make, which he thought would meet the case. ‘You will all agree,’ said he, ‘that our chief danger consists in the sly and treacherous manner in which the enemy approaches us. Now, if we could receive some signal of her approach, we could easily escape from her. I venture, therefore, to propose that a small bell be procured, and attached by a ribbon round the neck of the Cat. By this means we should always know when she was about, and could easily retire while she was in the neighbourhood.’

This proposal met with general applause, until an old mouse got up and said: ‘That is all very well, but who is to bell the Cat?’ The mice looked at one another and nobody spoke. Then the old mouse said:

‘It is easy to propose impossible remedies.’

Free downloads of Aesop’s Fables and many other books: