The superhero we need!

No guns are needed!

So aware of surroundings

In tune with nature 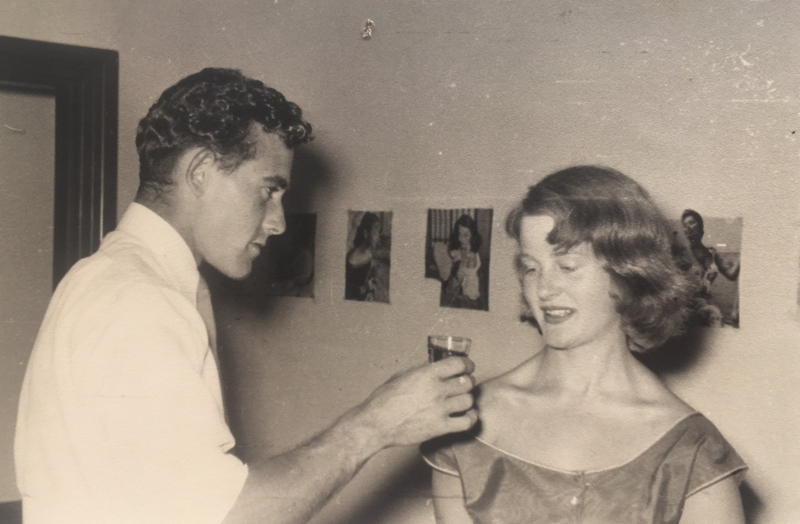 Teenage wickedness: about to accept a small glass of sherry, or not

“Teens” were coined when I was a teen
meaning those who were not-quite-human
yet.
I was mean to my mother
but otherwise failed
to make the grade
as a juvenile delinquent:
no motorbikes no intercourse
no sherry or Pimms or beer
no losing of the hat and gloves
just insolence
and flirting and kissing and staying out late
and gruesome fantasies
and a foggy fact of murder
lurking in the park.
Three years later I woke up
biochemically transformed
and mystified:
why had I despised
this mother who was pretty good
better than most in fact
this extraordinary woman
whose only crimes
were vividness and charm?
And I uttered an alien phrase:
“Good morning, Mother.”
She was startled. “You have changed.”
Overnight I was an adult.
That was now to be my state, my fate.

Lord Talbot said, “My gracious King, and honorable peers, hearing of your arrival in this realm, I have for awhile given truce to my wars, so that I may express my homage to my sovereign. In sign of that duty, this arm, which has reclaimed to your obedience fifty fortresses, twelve cities, and seven walled towns of strength, besides five hundred prisoners of high rank, lowers the sword it is holding before your highness’ feet, and with submissive loyalty of heart I ascribe the glory of the conquests I have gotten first to my God and next unto your grace.”

King Henry VI asked, “Uncle Duke of Gloucester, is this the Lord Talbot who has been so long resident in France?”

The Duke of Gloucester replied, “Yes, it is, my liege.”

“Welcome, brave Captain and victorious lord!” King Henry VI said to Lord Talbot. “When I was young — I still am not old — I remember how my father said that a braver champion than you never handled a sword. For a long time, we have been aware and completely convinced of your loyalty, your faithful service, and your toil in war, yet never have you tasted our reward, or been recompensed with so much as thanks, because until now we never saw your face. Therefore, stand up, and for these good and worthy deeds of yours, we here make you Earl of Shrewsbury, and in our coronation you will take a place.”

Vernon said to Basset, “Now, sir, to you, who were so hot and angry at sea, insulting this white rose that I wear in honor of my noble Lord of York, do you dare to maintain the former words you spoke?”

“Yes, sir,” Basset replied, “as well as you dare to defend the envious barking of your saucy tongue against my lord the Duke of Somerset.”

“Sirrah, I honor your lord as he is,” Vernon said.

In this context, the word “sirrah” was an insult.

“Listen carefully,” Vernon said. “He is not as good a man as the Duke of York.”

He struck Basset and said, “As testimony thereof, take that.”

Basset said, “Villain, you know the law of arms is such that the penalty is immediate death for whoever draws a sword here, or else this blow should set to flowing your dearest blood.”

Basset continued, “But I’ll go to his majesty, and request that I may have the liberty to avenge this wrong. When you shall see me next time, I’ll meet you to your cost.”

“Well, miscreant, I’ll be there before the King as soon as you,” Vernon said, “and after the King grants us permission to fight, I will meet you sooner than you wish.”

José Carreras discovered opera when he was a child. He saw the movie The Great Caruso, which starred Mario Lanza in the title role, and he started to sing the arias that he had heard in the movie. As a result, his family bought a record player and the soundtrack from the movie. Of course, as a child Jose did not sing as well as he did years later as a star of opera. He sometimes had to sing his favorite aria, “La Donna è Mobile,” in the bathroom. Still, sometimes he performed in his mother’s salon, and her customers gave him small tips that he used to buy small toys and candy. As an adult, Mr. Carreras made his debut at La Scala as Riccardo in Un Ballo in Maschera. The great tenor Giuseppe di Stefano saw him in rehearsal and noticed that his costume did not fit well. Mr. di Stefano took him to his own vast costume collection and gave him a costume that fit him better—it was the same costume that Mr. di Stefano had worn in the same role when he performed at La Scala.

Eileen Farrell was a favorite opera soprano of flutist Donald Peck, and he once performed with her. Afterward, he went backstage and complimented her on her singing. She was very nice and said that she was surprised by his big flute tone because his body was so slim. He replied, “But Miss Farrell, you have such a huge voice!” She joked, “Yes, but I am as wide as you are tall!” By the way, a young cellist with the Chicago Symphony Orchestra did not realize that opera singers will often not sing in full voice during rehearsal, and so he was unimpressed with Ms. Farrell during rehearsal and remarked, “So, what’s so great about Eileen Farrell?” But during the actual performance, she did sing with her full voice, and the cellist was properly impressed and remarked, “I can’t hear myself. Am I playing?” This was a charming way of admitting that he had been mistaken earlier.

Every opera singer will crack on a note in public. Early in his career, while singing in Tel Aviv, Israel, Plácido Domingo cracked on two notes while singing an important aria in Charles-François Gounod’s Faust, for which he had had inadequate time to prepare. He was horribly embarrassed, and he offered to resign from the Hebrew National Opera, but the directors would not accept his resignation. Instead, they said to him, “Plácido, here you have a chance to learn, and one mistake means nothing. We trust you, and we want you to continue.” This vote of confidence, Placido says, is “the biggest boost anyone has ever given me.”

In 1935, opera tenor Luciano Pavarotti was born in Modena, Italy, and his first critic was the doctor who delivered him. Hearing the infant scream, the doctor marveled, “Such high notes!” The ability to produce high notes under stress came in handy in 1969, when he was singing on stage in La Boheme in San Francisco when an earthquake struck. According to a 1979 article in Time, Pavarotti “gripped the hand of his Mimi, Dorothy Kirsten, a little more tightly, but kept on singing at full voice and never missed a beat. The earthquake drew to a peaceful conclusion and so did the performance.”

Tenor Rolando Vallazón was discovered—in a way—in the shower. At age 11 or 12, he was singing a song by Baloo from The Jungle Book in the shower when the director of the Academy of Performing Arts heard him and knocked on the door. He asked Rolando’s mother, “Who’s singing up there?” She replied, “I’m sorry. I’ll tell him to shut up.” He objected, “No, no. We’re starting a program for young people, and maybe he’d be interested in singing.” Rolando went there, he discovered that he enjoyed being on stage, and now he has an international career singing in opera.

As Plácido Domingo was warming up and really opening up his throat as he was being driven to the Metropolitan Opera, he noticed some people in the car next to his laughing at him. He rolled down his window and asked where they were heading. When he heard the reply, “To the Met,” he said, “Don’t laugh, because you’ll be hearing me in a few minutes!”

While singing for the Metropolitan Opera during the 1950s, soprano Lucine Amara ran into a problem: New York was a dirty city, and in the days before air conditioning dust settled everywhere in her apartment soon after dusting. She once cried, “I long for home! Even our dust is clean in San Francisco!”

Lilli Lehmann and Lillian Nordica once left the Metropolitan Opera at the same time on a rainy day. Ms. Lehmann looked at Ms. Nordica’s carriage, then revealed her boots and said, “You ride? I walk,” before setting out into the rain.

Robert Merrill sang opera at the Met in New York. In addition, he frequently sang “The Star-Spangled Banner” before New York Yankees home games. The Yankees gave him his own uniform, which sported No. 1 1/2.

For a while, the Met had two African-American sopranos: Martina Arroyo and Leontyne Price. One day at the Met, Ms. Arroyo was mistaken for Ms. Price. She replied, “I’m the other one, honey.”

RHODES, slave! Selling shoes and gingham,
Flour and bacon, overalls, clothing, all day long
For fourteen hours a day for three hundred and thirteen days
For more than twenty years.
Saying “Yes’m” and “Yes, sir”, and “Thank you”
A thousand times a day, and all for fifty dollars a month.
Living in this stinking room in the rattle-trap “Commercial.”
And compelled to go to Sunday School, and to listen
To the Rev. Abner Peet one hundred and four times a year
For more than an hour at a time,
Because Thomas Rhodes ran the church
As well as the store and the bank.
So while I was tying my neck-tie that morning
I suddenly saw myself in the glass:
My hair all gray, my face like a sodden pie.
So I cursed and cursed: You damned old thing
You cowardly dog! You rotten pauper!
You Rhodes’ slave! Till Roger Baughman
Thought I was having a fight with some one,
And looked through the transom just in time
To see me fall on the floor in a heap
From a broken vein in my head.

THE sudden death of Eugene Carman
Put me in line to be promoted to fifty dollars a month,
And I told my wife and children that night.
But it didn’t come, and so I thought
Old Rhodes suspected me of stealing
The blankets I took and sold on the side
For money to pay a doctor’s bill for my little girl.
Then like a bolt old Rhodes accused me,
And promised me mercy for my family’s sake
If I confessed, and so I confessed,
And begged him to keep it out of the papers,
And I asked the editors, too.
That night at home the constable took me
And every paper, except the Clarion,
Wrote me up as a thief
Because old Rhodes was an advertiser
And wanted to make an example of me.
Oh! well, you know how the children cried,
And how my wife pitied and hated me,
And how I came to lie here.