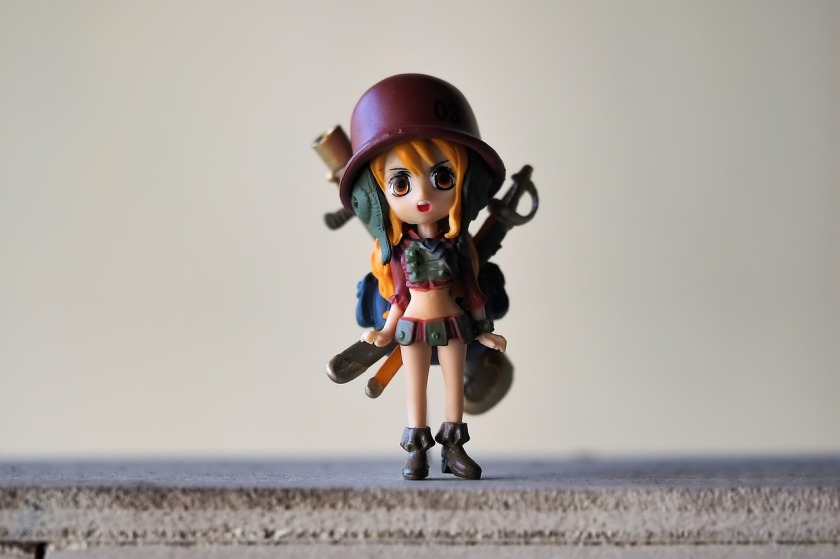 WHEN DOLLS GO TO WAR

Fred Astaire was very good to his Irish housekeeper, Jo Cody, buying her a round-trip to Ireland during her vacation each year—and when there was a family emergency in Ireland. He even paid for repairs to her car, and whenever she needed gasoline, he would lend her his credit card. Once, she bought gasoline away from the neighborhood, and the gas station attendant glanced at the credit card and said, “You don’t look like Fred Astaire.” After that, she bought gas only in Mr. Astaire’s neighborhood, where she was known.

While actor Paul Newman was in Kansas City to film Mr. and Mrs. Bridge, he went into an ice cream shop, where he met one of the local citizens, who was flustered to see a big movie star. The woman paid for her ice cream, then left the ice cream shop. A few moments later, she realized that she didn’t have her ice cream in her hand, so she returned to the store. Mr. Newman saw her and asked her, “Are you looking for your ice cream?” Still flustered, the woman could only nod. Mr. Newman then told her, “You put it in your purse with your change.”

Tom Jones, a male sex symbol and singing star, once was on tour in Mobile, Alabama. A limousine with a woman driver picked him up and drove away. They drove and drove, but the nightclub where he was to perform was still not in sight. Finally, Mr. Jones asked the driver, “Where are you taking me?” She replied, “I’m taking you to my house.” She wasn’t kidding. When they arrived at the driver’s house, 25 of her women friends were waiting to meet Mr. Jones.

American dance pioneer Ted Shawn suffered for his art. He wore body paint that itched when he sweated and headdresses that were extremely tight so they would stay on when he danced. Of course, he looked very different off stage. Once, he heard a woman say to a friend, “Look, there goes Ted Shawn!” The second woman eagerly looked, then said with disappointment, “That’s Shawn? Well, all I can say is, distance certainly lends enchantment.”

Actor Gene Barry, nee Eugene Klass, played Bat Masterson on television from 1959 to 1961. Once he stopped to buy a tallith (a fringed prayer shawl) for his son’s bar mitzvah. The man who waited on him at the store looked at his check, then asked, “Are you Gene Barry?” He replied that he was, and the man ran to the back of the store and yelled to his wife, “BAT MASTERSON IS JEWISH.”

When British actor Hugh O’Brian was visiting in New York City and feeling prosperous and famous, a woman said to him, “Excuse me, but would you be kind enough to tell me your name?” Mr. O’Brian also felt mischievous, so he replied, “Certainly, madam, my name’s Natalie Wood.” The woman turned to her companion and said, “There you are—I told you I was right.”

Suzanne Farrell attended Rhodes High School for a while. In the early 1960s, she was promoted in her dance career, and Ingenue magazine ran her photograph. A classmate from Rhodes told her, “You must be really famous. Your picture was on a page opposite the Beatles!” Because she had been so busy with dancing, Ms. Farrell asked, “Who are the Beatles?”

T.S. Eliot once got into a taxicab whose driver recognized him and said that he had given rides to other celebrities. One of them had been the renowned philosopher Bertrand Russell. According to the cabman, “I said to him, Bertie, what’s it all about then? And do you know, the twit couldn’t tell me.”

Pierre Monteux, a world-renowned conductor, was once denied a room at a hotel, but when the manager discovered that Mr. Monteux was famous, he said that he could arrange a room for him because he was “somebody.” Mr. Monteux refused the room and departed, saying, “Everybody is somebody.”

Pearl Bailey sometimes stepped out of character as an actress. While starring in Hello, Dolly, she got a roar of applause as she walked down a stairway preparatory to singing her big number, so she asked the audience, “Want me to come down the stairs again?” They did, so she did.

Comedian Zero Mostel was funny in real life. One day, his wife was waiting for him on their island home. When the ferryboat pulled in, Zero was tied to the mast and he yelled to his wife, “We had a mutiny and we lost!”

When David Niven, Jr. opened a restaurant in London—Drone’s—he decorated it by putting baby pictures of famous movie stars on its walls.

A photographer once snapped a shot of Noël Coward, then asked, “Could you please tell me your name?” Mr. Coward replied, “I recommend you to Who’s Who—and hell.”

“I didn’t care if I had to shine actors’ shoes as long as I was in show business.”—Jackie Gleason.

You never understood, O unknown one,
Why it was I repaid
Your devoted friendship and delicate ministrations
First with diminished thanks,
Afterward by gradually withdrawing my presence from you,
So that I might not be compelled to thank you,
And then with silence which followed upon
Our final Separation.
You had cured my diseased soul. But to cure it
You saw my disease, you knew my secret,
And that is why I fled from you.
For though when our bodies rise from pain
We kiss forever the watchful hands
That gave us wormwood, while we shudder
For thinking of the wormwood,
A soul that’s cured is a different matter,
For there we’d blot from memory
The soft-toned words, the searching eyes,
And stand forever oblivious,
Not so much of the sorrow itself
As of the hand that healed it.