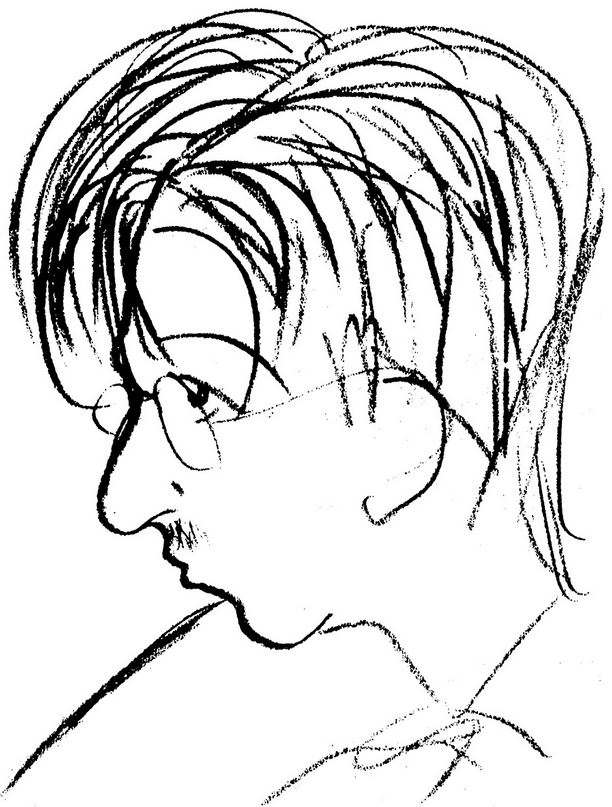 “All men should strive to learn before they die, what they are running from, and to, and why.”

James Thurber, book quote from “Further fables for our time”, 1978

from for so long.

It’s got to be spring

• Cartoon director Chuck Jones worked on a cartoon starring Marc Antony, a bulldog who adopts a kitten. The only dialogue is by a woman, and so expressions are incredibly important. At one point, the woman says to Marc Antony, “What are you up to now?” Marc Antony points to himself and assumes an expression of exaggerated innocence. Mr. Jones worked hard to get that expression right. He created and rejected a minimum of 50 drawings before he got the expression exactly right. He remembered, “I needed thatdrawing, and I knew it was somewhere between my memory and the tip of my pencil, but there was a sort of cornucopia of unsuitable drawings before I finally got the right one. Mr. Jones told a parable about a Japanese painter whom a rich man commissioned to create a painting of a stork for $10,000. The painting was supposed to be done in two months, but at that time the Japanese painter told the rich man to come back in another two months. When the rich man came back after waiting for four months, the Japanese painter took out his paints and created the painting of a stork in ten minutes. The rich man thought that he had been cheated: “Ten thousand dollars for that? It took you no longer than ten minutes!” The Japanese painter opened a cabinet door and thousands of drawings of storks fell out. Mr. Jones stated, “I didn’t do a thousand drawings of Marc Anthony’s look of exaggerated innocence, but I did do at least fifty before I got it right, and that doesn’t count the thousands of drawings I had done when I was learning to draw this dog, after learning how to draw anydog, after learning how to draw.”

• Joseph Barbera and William Hanna are famous for their Hanna-Barbera cartoons, featuring such stars as Yogi Berra, Huckleberry Hound, Tom and Jerry, and — of course — the Flintstones. Mr. Barbera almost became a professional boxer. As a youth, he was good, and a man said to him, “You’re a good lightweight. I’d like to manage you.” He wanted young Joseph to train and do roadwork for a while and then come down to the gym and see him. Young Joseph trained, getting up every morning to do so, and then he went to the gym. There he saw the current lightweight champion of the world working out and sparring in the gym. He also saw the lightweight’s managers — men wearing suits and pinkie rings and smoking cigars. Young Joseph thought, I’m getting into this business at the wrong end. He turned around and walked out of the gym.

• A cashier (“Anonymous”) at a Wisconsin department store wrote about talking with another cashier when a customer approached them. The other cashier said, “Hi, we are both open and can help.” The customer asked, “Well, which of you wants to help me more?” Of course, it didn’t really matter to the two cashiers — both were willing to help the customer. The customer asked, “Then how about you fight for the honor of checking out my items. You know — a fight to the death?” The cashiers were unwilling to do that — “Too much blood. It’s a mess to clean up” — so the cashiers played a game of rock-paper-scissors to see who would help the customer. “Anonymous” wrote, “I ultimately lost, but it made the customer happy and was the highlight of the evening!”

• Cartoon director Chuck Jones of Bugs Bunny fame did not make a lot of money when he created cartoons for Warner Brothers, but he valued the autonomy he had on the job — he could make decisions. Walt Disney paid his employees more money, but Walt retained the right to make all of the decisions. His employees would sometimes wait weeks for Walt to make a decision. Chuck once worked for four months for Walt, and he told him, “There’s only one job worth having at this studio: yours.” Walt replied, “That job’s taken.”

• Walt Disney stuck up for his employees. One of his employees mowed the grass by the window of a visiting film company executive who was so annoyed that he shouted at the employee. Mr. Disney called the executive into his office and told him, “You spoke harshly to that man. He’s been with me for 20 years. I don’t want it to happen again.” The executive replied, “Yes, sir.” By the way, Mr. Disney once stated what he felt was the way to success: “Quit talking — and start doing it.”

• When Count Basie broke up his big band and started a sextet, everyone was surprised that Freddie “Pepper” Green, an important part of Count Basie’s “All-American Rhythm Section” for 14 years, was not part of the sextet. But Pepper showed up for work anyway, telling Count Basie, “After I gave you the best years of my life, you think you’re going to leave me now?” The six-musician group became a seven-musician group, and Pepper worked for Count Basie another 35 years.

• Heinrich Conried, director of the Metropolitan Opera in New York City, knew that the clouds in Wagner’s Walküreare important, and once he spent three hours rehearsing the movement of the clouds with the stagehands before a performance. He then told them, “Very good! If you do it as well as that tonight, I shall be much pleased.” One of the stagehands replied, “But Mr. Conried, we shall not be here tonight. Our eight-hour day expires at five o’clock.”

• The father of syndicated columnist Froma Harrop worked in a box factory during the Great Depression. As you would probably expect, everyone was broke and desperate for money. However, her father told her that whenever overtime was available, the employees let it go to an employee who was raising children. Ms. Harrop explains, “The laborers were obeying the unwritten and unenforceable ‘humanity clause,’ whereby one gives up some personal gain in deference to another’s screaming need.”

• “Every day I get up and look through the Forbes list of the richest people in America. If I’m not there, I go to work.” — Robert Orben