Song: “Blueberry Jam No. 27” from the album BLUEBERRY & COUNTRY SUGAR

• Many young children are afraid of the barber, as Orlandor Davidson knows. Once, an 18-month-old boy actually did a somersault off the booster seat in the barber chair. Mr. Iverson froze, and the boy’s father froze. Fortunately, another barber caught the boy before he hit the ground. By the way, Kwame Bandele remembers his first trip to the barbershop, although it was his babysitter who got the haircut. He was five or six years old, and he sat by the five- or six-year-old son of the barber. The barber was in a ranting mood, and he was saying things like, “What’s got into these young kids? Runnin’ around, lookin’ like fools? Can’t get no respect that way. Know what they need? They need a haircut and a shave. Now that’show you get respect.” Young Kwame turned to the barber’s young son and asked, “Does he want us to get a haircut and a shave?”

• Joan and Nancy, the nieces of Alexander Woollcott, had vivid imaginations when they were young, and they created imaginary friends. Joan created a girl whose name was Alice, a French cow, a two-headed man, and some gnomes, Nancy created three fairies whose names were Rosabel, Gossamer, and Violetta. One day, Joan was angry at Nancy, and so she complained to their mother about Nancy’s belief in Rosabel, Gossamer, and Violetta. Their mother, however, said, “Why shouldn’t she have her fairies? You have Alice and the French cow, don’t you?” Joan complained, “But don’t you understand, Mother? My people are real!”

• When Panio Gianopoulos, Molly Ringwald’s husband, was four years old, his mother allowed him to walk to preschool all by himself — something that made him feel both proud and grown up. When he was grown up and a father who worried about the safety of his children (and who took his daughter to preschool), he asked his mother, “Are you completely crazy? You let me walk to school by myself! I was four years old!” His mother replied, “Of course I didn’t let you. I kept about 20 feet behind you — close enough to make sure you were safe, but far enough so that you didn’t know I was there and would feel like a big kid.”

• Art Linkletter knows about many, many funny happenings in families. For example, one small girl spent a lot of time watching workmen as they repaired the road in front of her house. Her grandmother, who was babysitting her, worried that she might annoy the workmen, so she said, “You shouldn’t be out there bothering those workmen, dear.” The small girl replied, “Oh, that’s all right, Grandma. I’m intimate with only one of them.”

• Life is made of little moments that are often remarkable. In Rome, New York artist Raphael Soyer was sketching his wife and a wall of the Coliseum. A young boy of about eight sat by Raphael’s wife, Rebecca. Raphael used sign language to ask him to remain there for a few moments, and then he put him in the drawing. When the drawing was done, he showed it to the boy, who looked at it and said, “Bravo.”

• Jeff Bezos, the founder of Amazon, has always loved numbers, even when he was a child. During a car ride with his grandmother, who was a heavy smoker, he calculated how many years her tobacco addiction would reduce her life expectancy. He thought that she would praise him for his mathematical ability; instead, she started crying.

• Margret and H.A. Rey wrote and illustrated the Curious George books, which are about a curious monkey named George. Once, a small boy met the Reys. Margret remembers that the boy had “disappointment written all over his face” as he said, “I thought you were monkeys, too.”

• When renowned conductor Lorin Maazel was only seven years old, his mother discovered him with the score of Haydn’s Surprise Symphonyin his hands. She asked what he was doing with it, and he replied, “Reading it from top to bottom.”

I remember it was covered

from brim to brim

with all of these colorful & expensive fishing lures.

There were green ones, blue ones,

yellow ones, red ones …

& a few home-made ones

But grandpa was not a very good fisherman,

and was never known

to have ever caught anything of note.

Except for that one day, though,

so the legend goes,

when, he removed his cap too quickly, 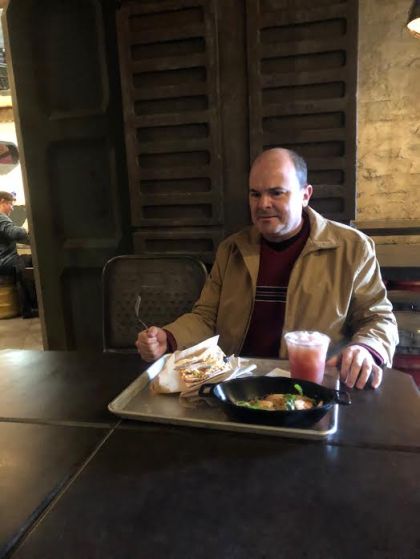 Though the force wasn’t with me that afternoon, it did promise to catch up with me later

best feeling in the