“Why do people think artists are special? It’s just another job.” 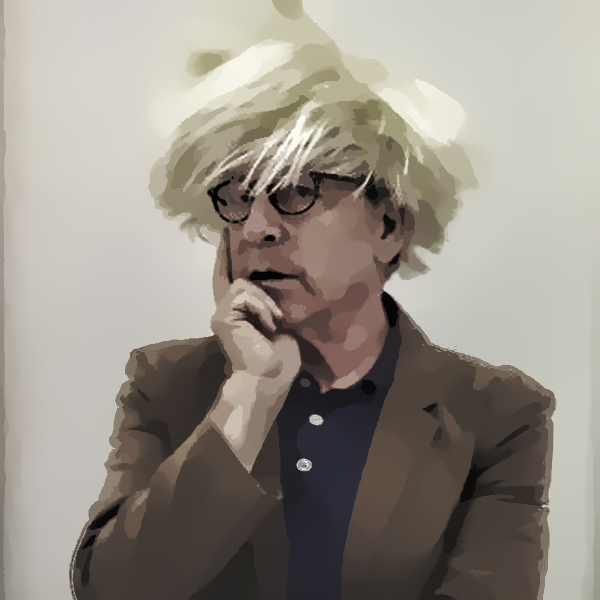 “Once artists are expected to shock, it’s that much harder for them to do so.”

“Artists do not own the meaning of their work.”

a lot of other foods, too

When I go to Subway

what I want on my sandwich

on the inside of the card.

Because, most of the time,

that was all I had to say anyway,

& now Peanuts & the gang have

1 The wicked flee when none pursueth: but the righteous are bold as a lion.

2 For the transgression of the land there are many princes thereof: but by a man of understanding and knowledge a realm likewise endureth long.

3 A poor man, if he oppress the poor, is like a raging rain, that leaveth no food.

4 They that forsake the Law, praise the wicked: but they that keep the Law, set themselves against them.

5 Wicked men understand not judgment: but they that seek the Lord understand all things.

6 Better is the poor that walketh in his uprightness, than he that perverteth his ways, though he be rich.

7 He that keepeth the Law, is a child of understanding: but he that feedeth the gluttons, shameth his father.

8 He that increaseth his riches by usury and interest, gathereth them for him that will be merciful unto the poor.

9 He that turneth away his ear from hearing the Law, even his prayer shall be abominable.

10 He that causeth the righteous to go astray by an evil way, shall fall into his own pit, and the upright shall inherit good things.

11 The rich man is wise in his own conceit: but the poor that hath understanding, can try him.

12 When righteous men rejoice, there is great glory: but when the wicked come up, the man is tried.

13 He that hideth his sins, shall not prosper: but he that confesseth, and forsaketh them, shall have mercy.

14 Blessed is the man that feareth alway: but he that hardeneth his heart, shall fall into evil.

15 As a roaring lion, and an hungry bear, so is a wicked ruler over the poor people.

16 A prince destitute of understanding, is also a great oppressor: but he that hateth covetousness, shall prolong his days.

17 A man that doeth violence against the blood of a person, shall flee unto the grave, and they shall not stay him.

18 He that walketh uprightly, shall be saved: but he that is froward in his ways, shall once fall.

19 He that tilleth his land, shall be satisfied with bread: but he that followeth the idle, shall be filled with poverty.

20 A faithful man shall abound in blessings, and he that maketh haste to be rich, shall not be innocent.

21 To have respect of persons is not good: for that man will transgress for a piece of bread.

22 A man with a wicked eye hasteth to riches, and knoweth not, that poverty shall come upon him.

23 He that rebuketh a man, shall find more favor at length, than he that flattereth with his tongue.

24 He that robbeth his father and mother, and saith, It is no transgression, is the companion of a man that destroyeth.

25 He that is of a proud heart, stirreth up strife: but he that trusteth in the Lord, shall be fat.

26 He that trusteth in his own heart, is a fool: but he that walketh in wisdom, shall be delivered.

27 He that giveth unto the poor, shall not lack: but he that hideth his eyes, shall have many curses.

28 When the wicked rise up, men hide themselves: but when they perish, ye righteous increase.

• Jamie Kaler starred in the TBS comedy My Boys, on which he played Mike Callahan. In his life, he has shown a lot of persistence. After resigning his commission in the United States Navy, he wanted a job in a certain bar on the beach at San Diego. The bar did not have any job openings, but he returned to seek employment at the bar 27 days in a row, and the bar hired him. He started taking acting classes, and he started acting in commercials, including a commercial for Sea World: “All I did was watch Shamu jump, and that was it. But I made a boatload of money off it, and I immediately thought, ‘This is going to be the easiest profession ever.’ But I didn’t get another job for a year.” He also learned early to live life. In San Diego, he roomed with John David Lenz, a dedicated actor who died young: “I’d wake up on a Saturday morning having bartended and been out drinking, and he’d be playing Henry Vand quoting the movie with Laurence Olivier. And he ended up dying. He got shot […] walking to his car, a random shooting by a 15-year-old girl. So I had to come home to the apartment and pack up his stuff, sell his car and had to help his parents take all his stuff out of the house. And then we all went back to Kansas for the funeral. I think after that I was, ‘Man, I’ve got to get busy living. It’s all going to end.’” He kept acting, picking up more and more roles, but he never officially quit his night-time bartending job: “Finally the owner called and said, ‘Dude, you haven’t worked in nine months, do you still work here?’ I said, ‘No, I guess I don’t.’”

• Celebrity photography can be an art, and photographers appreciate actresses who truly know what kind of makeup works for them. In 1944, Ingrid Bergman had a sitting with celebrity photographer John Engstead, who had been told by David Selznick’s assistant producer William Perreira, “We’re going to change Ingrid Bergman’s image. We’re going to glamorize her … a new makeup, a new hairstyle, and a new wardrobe, and we’d like you to photograph her.” Mr. Engstead set up his lights while Ms. Bergman’s image was changed, and eventually the “transforming” man came out of the “transforming” room and told him, “She’s changing. She looks great. I changed her eyebrows, added false lashes, and shaded the face.” When Ms. Bergman came out, however, she did not look transformed—she looked like the same beautiful Ingrid Bergman. She explained, ‘I don’t mind trying something new, but I think I know what is best for me and this glamour makeup is not right. I look better with nothing on my face.” After the transformation, Ms. Bergman had washed off the makeup and combed her hair in her own way. Of course, she was beautiful and she looked beautiful, and her photographs that day showed her beauty.

• Too often, Hollywood has stereotyped actors and actresses, sometimes because of their ethnicity. Anna May Wong played many, many Oriental stereotypes in the 1930s, something she disliked. So, of course, did other actors and actresses with Oriental features (or makeup that made them appear Oriental). Once, Ms. Wong said, “Why is it that the screen Chinese is nearly always the villain? And so crude a villain. Murderous, treacherous, a snake in the grass. We are not like that. How should we be, with a civilization that is so many times older than that of the west?” In 1960, after appearing seldom in movies for two decades, she played Lana Turner’s housekeeper in Portrait in Black. Again, the stereotypes came out, this time from the publicity department, which explained Ms. Wong’s long absence from the screen by passing along a proverb that supposedly had been taught to Ms. Wong by her mother, “Don’t be photographed too much or you’ll lose your soul.” Ms. Wong’s own explanation was this: “I was so tired of the parts I had to play.”

• As a teenager, Scottish actor Ewan McGregor knew what he hated, and he knew what he wanted to do with his life. He hated school, and he wanted to act. His parents also knew what he hated, and they knew what he wanted to do with his life. And so one day, when Ewan was 16, his mother told him, “Look, I’ve spoken to your dad, and if you want to leave school you can.” Lest anybody is wondering what planet his parents are from, since they allowed him to leave school, Mr. McGregor says that they are from “[t]he planet of common sense, I think. It was a wise decision. A week later I was working in Perth Repertory Theatre helping to build sets, learning my trade from the bottom up.” Of course, in his case, dropping out of school worked out well, and he became a famous and successful and good actor.

• Amy Ryan admires director Sidney Lumet, working with him on the TV series 100 Centre Streetand the movie Before the Devil Knows You’re Dead. According to Ms. Ryan, “The great gift from Sidney, among many, is he really feels actors can do no wrong.” As evidence, she cites the example of her appearing on his TV series 100 Centre Streetin one episode, and only three episodes later being asked to appear again in the series, but playing a different character. She said in answer to Mr. Lumet’s request, “Sidney, yes, of course, thanks, but how am I going to pull this off?” He replied, “You’re a good enough actor—you’ll figure it out.” According to Ms. Ryan, “If that man can give the OK to that, you think, ‘Oh wow, maybe I can do anything.’”

• Actor John Hurt co-starred with Harrison Ford in the 2008 action-adventure movie Indiana Jones and the Crystal Skull. The then-66-year-old Mr. Ford had kept himself in shape, and he did his own fights and many of his character’s stunts in the movie. At one point, after performing a harrowing stunt, Mr. Ford turned to Mr. Hurt and joked, “Well, you don’t think they employ me to act, did you, John?”

Whose woods these are I think I know.
His house is in the village though;
He will not see me stopping here
To watch his woods fill up with snow.

My little horse must think it queer
To stop without a farmhouse near
Between the woods and frozen lake
The darkest evening of the year.

He gives his harness bells a shake
To ask if there is some mistake.
The only other sound’s the sweep
Of easy wind and downy flake.

Note: This poem entered the public domain on 1 January 2019.