“We pass through this world but once, so do now any good you can do, and show now any kindness you can show, for we shall not pass this way again”

“Get it down. Take chances. It may be bad, but it’s the only way you can do anything really good.”

#HowHardDidAgingHitYou
I’m a child in that ‘before’ photo
coordinated outfits and
recess and
lunch money and
I was beautiful then, too.

How unfair it is
to yourself ten years ago, to
mock who you were
before you got here.

I didn’t need mascara or
twenty-two karat gold or
shellac nails or
expectations of beauty
when I was 14.

This isn’t fair to anyone
and especially to you;
punish and prize
in one photo collage
simply because time passed.

Aging doesn’t hit, it just happens.
I do not have the strength to
hit and criticize the old me
because, sometimes,
I wish I lived in ‘before’.

***
Truthfully, I did think about taking part in this viral challenge. It’s easy to jump on a bandwagon and take part in this immediate validation of how you perceive your worth today vs ten years ago.

For me, I knew that it wasn’t fair…

As imagined by someone

Who doesn’t date much

• Lots of baseball players have superstitions that they follow. For example, Randy Johnson used to sleep with his head at the foot of the bed the night before he was scheduled to pitch. However, he fell asleep one night with his head at the head of the bed, and the next day he pitched and won. Following that experience, he said, “I don’t have any superstitions any more.” As a pitcher, Mr. Johnson could be intimidating. While pitching AAA baseball, he hit a batter who started coming toward the plate. Mr. Johnson’s teammate Brian Holman remembers, “Randy screamed at him, ‘Don’t mess with me. I’ll take your life.’ The guy went right to first base.” At 6-feet-10, Mr. Johnson was the tallest player in major-league baseball. He was also a photographer, having studied fine arts in college. One day, he walked near an industrial dumpster. He was tall enough to see what was inside: a car perfectly positioned to fit in the dumpster’s tight confines. Mr. Johnson took a much-admired photograph of the car and dumpster.

• Pete Rose often put himself in the right place at the right time. He and fellow Cincinnati Red Alex Johnson played in the outfield together in a day when Mr. Johnson was having a little difficulty fielding. Mr. Johnson ran to catch a long line drive hit by Hank Aaron. He jumped in the air, but the baseball bounced off his glove—into the glove of Mr. Rose, who had run all the way from center field to back him up. A little later, after Mr. Johnson made an error when he mishandled a line drive that came straight to him, he joked to Mr. Rose, “Where the h*ll were you?” Mr. Rose continued his hard play later when he was a Philadelphia Philly. In game 6 of the 1980 World Series (with the Phillies leading 3 games to 2), hard-hitting Frank White of the Kansas City Royals popped up. Phillies catcher Bob Boone dropped the ball, but Mr. Rose, who had hustled from first base to back him up, caught the ball before it hit the ground, making an out. The next Royal struck out, and Mr. Rose was once again a World Champion.

• One baseball player who never lost his enthusiasm for the job was relief pitcher Tug McGraw. Steve Fireovid, who had a brief career in the major leagues as a pitcher (71 innings over his 15 years in professional baseball), remembers that Mr. McGraw, then in the final year of his 20 years in baseball, would go into the Philadelphia clubhouse and scream, “ANOTHER DAY IN THE BIG LEAGUES!” Mr. Fireovid marvels, “This guy had been doing this for two decades, and he still had all this enthusiasm.” Mr. Fireovid did work hard as a baseball pitcher, despite pitching only briefly in the big leagues. He once pitched in Puerto Rico during the winter, and in one game he pitched a two-hit shutout with 10 strikeouts and no walks. The next day, he carefully checked all the box scores from the league in Puerto Rico. His pitching had been by far the best of the night, and he realized that he had achieved a lifelong dream: “One day in your life, be the best in the world at what you do.”

• On May 31, 1993, young Los Angeles Dodger catcher Mike Piazza attempted to throw a Cardinal base runner out, but instead he hit Dodger pitcher Tom Candiotti on the butt. Players on both teams laughed, and the next day all of the Dodger pitchers arrived at the ballpark with an addition to their uniforms: They were wearing targets on their butts. Another mishap early in Mr. Piazza’s career came about because of the Dodgers’ international — American, Japanese, Mexican, Dominican Republic, Korean — pitching staff. He went to the pitching mound and started speaking Spanish to Japanese hurler Hideo Nomo, who did not speak Spanish. Mr. Piazza later explained, “Brain cramp.”

• On July 15, 1973, California Angel Nolan Ryan pitched a no-hitter against the Detroit Tigers at Tiger Stadium. He was so overwhelming as a pitcher that when the Tigers’ Norm Cash came out to bat with two outs in the 9thinning, he carried an enormous table leg (that he had gotten from a wooden table in the Tigers clubhouse) instead of a normal bat. Mr. Ryan yelled to the umpire, “Check his bat.” Umpire Ron Luciano looked at the table leg and told Mr. Cash, “Get rid of it.” Mr. Cash protested, “But I’ve got no chance with a bat.” He was right. Using a normal bat, he popped up and made an out, and Mr. Ryan recorded his second no-hitter of the season.

• Early in his career, Philadelphia Phillie Mike Schmidt had a huge swing. Teammate Willie Montanez used to say “Achoo, achoo” when Mr. Schmidt was around, joking that he had caught a cold from the breeze of the slugger’s swing. Mr. Schmidt ended his career with 548 home runs, but he could have one more. In 1974, he hit what must be the longest single in history when the baseball was stopped by a loudspeaker that hung from the Astrodome. The baseball almost certainly would have gone into the center-field bleachers if it had not hit the loudspeaker, which was hanging 117 feet above the baseball field, 360 feet from the home plate.

• When Christy Mathewson, who was later a Hall of Fame major-league pitcher, started pitching for a minor-league baseball team in Taunton, Massachusetts, the batters hit his pitches hard. Near the end of the game, he learned that the catcher was a friend of the veteran pitcher for Taunton. To help ensure that his friend did not lose his position as veteran pitcher, the catcher was telling the batters which pitch Christy was going to throw.

• Cincinnati Reds catcher Johnny Bench could make a point with his catching. In a game against the Dodgers, Cincinnati pitcher Gerry Arrigo was throwing a very good curveball, but a very slow fastball. To make exactly that point, Mr. Bench caught one of Mr. Arrigo’s fastballs barehanded. Both teams laughed, and Mr. Arrigo’s fastball got a whole lot faster.

• Many people regard 7 as a lucky number. As a Minnesota Twin, infielder Frank Quilici wore No. 7 on his uniform. Later, Mr. Quilici returned to Minnesota as a coach. Because someone else was wearing No. 7, he wore No. 43 — which he chose because its digits add up to 7. 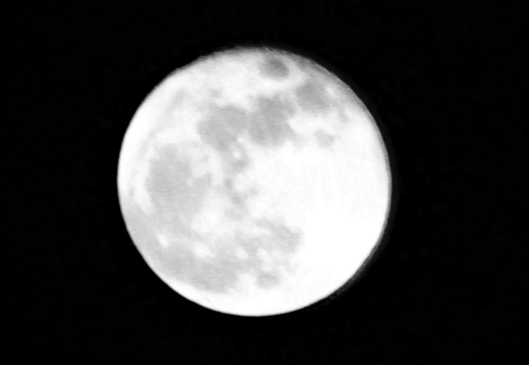 The Wolf Moon
high
in the night sky
burning

awakens
an inner
instinctive
yearning
in my soul

In bed you and I